TODAY'S SPOTLIGHT TUNE: Saga - Only Time Will Tell. You know this Canadian prog rock band from the early MTV favorites "On The Loose" and "Wind Him Up."

This 1987 single barely hit the Canadian RPM Singles chart and went unnoticed in the U.S. I only saw the accompanying video once on MTV's New Video Hour when VJ Carolyne Heldman was hosting the show. I remember buying the Wildest Dreams cassette and expecting to see other tracks with titles such as "Sole Survivor" and "Heat Of The Moment," but I was wrong. If you scoured the cutout bins like I did between '88 and approximately '92, then you stood a good chance of finding this album for dirt cheap.

This is now part of the rotation on Awfully Awesome 80's. What other lost Canadian hits from the 80's and early 90's aren't being played on the station? Let me know through our webpage's chat widget!

Posted by Gilbert Matthews at 12:31 AM 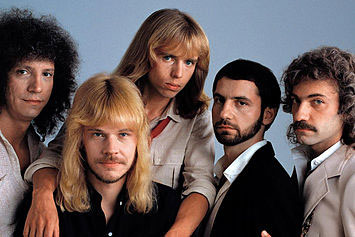 Our October 2022 Featured Artist Of The Month is Styx! Beginning on October 6th(7 tracks a day between the hours of 10 AM and 10 PM eastern), you will hear one of their top 40 hits, minor charters or non-charters as well as selected album tracks(70's through early 90's). Dennis DeYoung, Tommy Shaw, J.Y. and Glen Burtnik solo material will also be showcased. At least 70 tracks will be in the mix!